Seasoned veterans of my dusty, long-dormant blog will remember I did a comprehensive post (in 2012! EIGHT YEARS AGO!!!!) on how to use the Lync Optimizer to automatically create dialplans for your Lync deployments. That guide is still useful for every on-prem version of Lync and Skype for Business since then.  I did a similar guide for Skype for Business Online in 2017 (a mere 3 years ago). With all the changes that Teams has brought (Direct Routing, and so much more!), I figure its about time I did an updated guide on how to use UCDialplans.com in Direct Routing scenarios.

Another reason why I'm doing this now (February 2020) is because for the first time, the monthly total number of S4BOnline/Teams rulesets generated by UCDialplans.com has surpassed the number of S4B On-prem rulesets. This is an unofficial barometer of which platform is more popular for Enterprise Voice deployments. I could go on about how many S4B On-prem deployments are at a mature state and generally don't require many net-new dialplans compared to Teams where many are just starting to move their voice loads to it, but SEMANTICS! Just look at the chart! 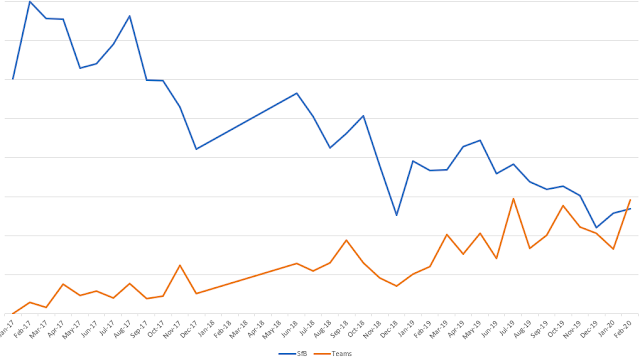 Who should use this guide?

If you're on MS Teams and you are using Teams as your phone system, you'll be using it in one of two modes (or both in some cases):

If you're using Teams Direct Routing (using your own SBCs to provide dialtone), then you should definitely use this guide. It makes the entire process of creating voice routing policies, routes, PSTN usages etc. so much easier. If you are already confused by the above terms, then I HIGHLY recommend you use this tool.

If you're using Microsoft Phone System (where Microsoft is your telephony provider), then I suggest you read my blog post on Tenant Dialplans in Skype for Business Online. It will tell you why UCDialplans.com is still useful when your entire telephony infrastructure is managed by Microsoft. Even though it was written for SfBO, it still applies to Teams.

What can UCDialplans.com do for me?

What won't UCDialplans.com do for me?

If you're using Direct Routing, the "only" thing UCDialplans.com can't do is setup your SBC infrastructure and configure the link between Teams and your SBC. That has to be done prior to applying a UCDialplans.com script to your environment. Its not a small task, and could take you a while. Don't worry, I'll be here when you're ready.

To get familiar with what's required, read the excellent documentation on Microsoft's site starting with the Overview, then Plan Direct Routing, followed by Configure Direct Routing, but stop when you get to the section listed Configure Voice Routing. This is the point where UCDialplans.com takes over.

For those using Direct Routing, I'm assuming you've already setup your SBC infrastructure and have paired your SBCs to your Office 365 tenant. UCDialplans.com PowerShell scripts will check for the existence of at least one SBC via Get-CsOnlinePSTNGateway. If one isn't found, then the script will stop after creating a dialplan.

Go to UCDialplans.com and sign in with a Microsoft account. Once validated, you will see the webform for creating your dialplan become visible.

UCDialplans will start whipping its army of trained monkeys and in no time flat, you will have a customized PowerShell script ready for download.

Click the DOWNLOAD RULESET HERE button, and save the script as a .PS1 somewhere on your system. You will probably have to unblock it to make it usable without prompting. Right-click the file and select Properties. Click Unblock, and then OK. 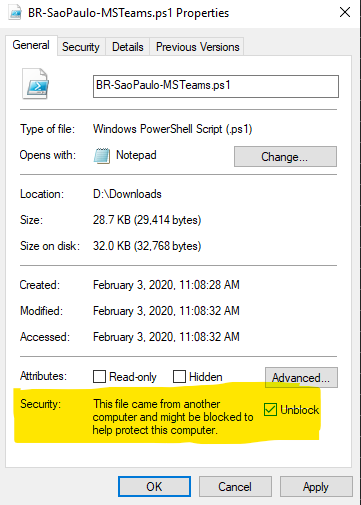 If you've already got a functional Teams EV environment, I strongly suggest you backup your EV details, by downloading and running my suite of Teams Backup/Restore scripts. For more details, see this post, or go to Github to download the latest version directly.

Run the script via PowerShell

Open a PowerShell window, navigate to where the script is located and run the script. You might be blocked from running the script due to PowerShell policies. If this is the case, then run the following command from an elevated PowerShell prompt:

Or you can open your kimono and use Unrestricted in place of RemoteSigned.

Run the script from a PowerShell prompt. If you are not already signed into your Office365 tenant, you will be prompted for credentials. If your admin account is not in the same domain as your tenant (ie. uses an @tenantname.onmicrosoft.com address), then use the -OverrideAdminDomain switch.

When the script starts, you'll be presented with several questions:

You can either assign the dialplan (which controls how users can dial phone numbers) to everyone by default via the Global dialplan or a user-level dialplan (the default selection). If the majority of your users are in the same location, you can use the Global dialplan, which requires one less step when enabling new users for voice. If you will be creating multiple dialplans, then its probably best to select User. The script will create normalization rules as desired.

Assign internal dialing rules to the local or Global dialplan?

If you entered extension ranges via the UCDialplans UI, you will be prompted with this question. If you say Global, the extension ranges you entered will be added to the Global tenant dialplan. This means that any new dialplans created in the future will add those normalization rules to the top. This takes advantage of an undocumented feature described in this post. If you don't want to take advantage of this, select Local.

A voice policy defines exactly what numbers a user can dial. You can use voice policies to allow only certain users to dial internationally, or set common-area phones to only dial local numbers (as examples). If you have a simple deployment where the majority of users will be assigned the same voice policy, you can set this globally by selecting either Local, National, or International. Local means that users will only be able to dial local numbers. National means they can dial any number within the country, and International has no restrictions.  If you do not assign anything at the global level, you will have to manually assign voice policies to all users.

If the script detects the presence of existing voice policies created with UCDialplans, it will ask if you want to leverage least-cost/failover routing for these voice policies. If you say Yes, the script will assign the existing voice policies in a way that will route calls using the cheapest path possible, as well as ensure that calls can still work if the main PSTN gateways are down. See this post for more info (was written for Lync, but still applies to MS Teams)

Once done, you should have a fully functional voice infrastructure in MS Teams. If you didn't use the Global options for the dialplan and/or voice policy, you'll have to assign policies to your users. A simple example is as follows (assumes you're assigning to all EV-enabled users):

It will take some time for these to take effect, and will probably require users to restart Teams at some point.

Oooops! I screwed up!

If you accidentally screw up applying a UCDialplans.com script and want to revert to a "clean" setup, you can run the following commands, which will wipe out all custom dialplans, voice policies etc. Don't run this if you've already got a working system.

UCDialplans.com scripts can be used for some interesting use-cases. For example, assume you're a company that has a single SIP trunk infrastructure that is homed in a single country. For this example, we'll assume its in Canada. Now also assume that you have some users in other countries such as the UK, that have Canadian numbers assigned to them. Those UK users would normally be forced to dial phone numbers as if they were in Canada, which is not something they would be used to.

In this case, you can generate a UK-based script from UCDialplans.com and run it against your deployment using the -DPOnly switch. This will force the script to only create a dialplan for the UK and it won't create extraneous routes/policies etc. You then assign the resulting UK-based dialplan to your UK users and they can dial numbers as they are accustomed to in the UK.