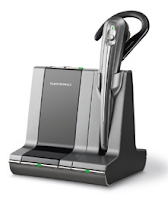 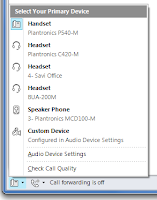 In case of lawyers, please note that the opinions presented here are mine alone and are not representative of my employer or any other vendor, Plantronics included.
Posted by Ken Lasko on Thursday, November 25, 2010 5 comments:

The Response Group Service (RGS) is a basic hunt group/interactive voice response system included with OCS/Lync.  While it doesn't have the features of a full-fledged call center application, it is still extremely handy for a lot of companies that don't require (or want to pay for) a separate solution.

Response Groups in Lync haven't changed significantly since the OCS R2 days. You still have to create and manage the hunt group/IVR workflow via a web-based console that is separate from the main Lync Control Panel.  There is a Workflow tab within the Response Groups section of the Control Panel, but clicking on the Create or edit a workflow button will open up a separate IE window where you manage workflows. The interface is very similar to the OCS R2 version. Why they couldn't port the webpage into the Silverlight Control Panel is beyond me. It couldn't be that difficult to translate.

Just noticed that Chris Norman of VOIPNorm fame, has published an article on TechNet Blogs about my Dialing Rule Optimizer.  Does this mean I'm famous?  :)

I'll be the first to admit that I've got a certain level of bias when it comes to Microsoft products. I'm pretty sure they installed some sort of mind-control chip in my brain when I worked there as a technical support guy back in the MS-DOS 6.2 days. If there is a chip rattling around my skull, it does malfunction from time to time, because I've never been afraid to knock MS for putting out some truly dreadful crap over the years.

When Microsoft does get it right, it gets it right in a big way. Exchange is one of those things. It seems to be the gold standard for corporate email systems, and with good cause.  Its extremely stable, rich in features and most importantly, easy to use across many different platforms (PC, web, mobile). My perception could be skewed, because as an Exchange/OCS/Lync consultant, I'm not going to be called into a company for help with Lotus Notes (unless its to help migrate to Exchange).

For all my love of OCS, I noticed that most of the companies that wanted to use it weren't really interested in the Enterprise Voice functionality. They would use OCS for its terrific IM capabilities, easy-to-use client and admittedly so-so conferencing features (I knocked a bunch of points off mainly for the poor Live Meeting interface).  I always thought they would organically grow into Enterprise Voice, but it didn't happen as often as I thought it would.  Overall, I thought OCS was a fantastic product, but there were some obvious holes that made it less than ideal for replacing a PBX.  The biggest omission was call admission control and any real resiliency for voice communications.  Companies saw that, and maybe felt that OCS was a little too version 1.0 to trust for their telephony needs.

Lync Server 2010 changes all that. Its a truly unified communications platform. OCS's missing features (call admission control, voice resiliency etc) are now in place, and Live Meeting has been dropped in favour of a single client that combines all the features of Communicator and Live Meeting in one very easy-to-use package. I don't think any of MS's competitors can claim to provide all the features of Lync under one product SKU (I'm looking at you, Cisco).

Sure, my mindset could be affected by my Microsoft bias (damn you mind-control chip!).  However, in the recent few weeks, I've noticed a dramatic change in the inquiries and requests for proposals coming my way at the consulting company I work for. Rather than just being interested in the basic IM and web conferencing features, almost every corporate customer is keenly interested in exploring Enterprise Voice.  Recent partnerships, including the one with Polycom for enterprise video conferencing, means that Lync can very well be the all-encompassing corporate unified communications platform it intends to be.

It reminds me of that not-so-long-ago time when most corporate customers were extremely wary of moving their telephony systems into the TCP/IP network space. Almost overnight, the wariness was replaced by enthusiasm as it was shown to be a safe and reliable way to reduce costs, administration overhead and provide improved features.

Have we reached a similar tipping point in regards to Lync?  It seems as though Microsoft may have gotten this product release right, and the corporate world is ready to give them the chance to prove that Lync can be the future of telephony. Will Lync be the Exchange Server for telephony? Time will tell, but I've got a good feeling about this....

Greetings all, its been a while since I've updated this blog and for good reason.  I just got back from a week-long trip up to a VERY remote mine site above the Arctic Circle in Alaska.  I did an Exchange 2007 to Exchange 2010 migration, including UM. It was cold, dark much of the time but starkly beautiful.  Not somewhere I'd consider living, but was pretty cool to visit.

While I was away, things definitely happened on the Lync front. It's gone RTM (as I'm sure everyone already knows). It was frustrating being so remote, because the Internet connection just wasn't fast enough for me to download the bits.  Now I'm back home and able to really get into things.

I had a customer call the other day talking about deploying Lync.  One thing he was very interested in is the Call Recording feature. He wanted to have the ability for users to record calls with clients for documentation purposes.  I hadn't spent much time (well, no time) with call recording in Lync, so I figured now was a good time to check it out.