The UCDialplans.com Winter of Code continues at a torrid pace!

Hot on the heels of the MS Teams EV Backup/Restore scripts is another script that I can't believe someone hasn't already cooked up.

Say that you have a well-oiled Skype for Business Enterprise Voice deployment that you carefully cultivated over the years into a perfectly tuned beast. You're considering migrating to Teams, but aren't terribly enthusiastic about having to recreate all that magic in Teams.

Well, worry no more! I've created a script that will copy all of your Skype for Business Enterprise Voice settings into MS Teams. It will handle the following:

Most of this is completely automatic, except for the PSTN gateway part. Teams PSTN gateways have to be publicly accessible via FQDN, and that FQDN's domain name has to be registered in the O365 tenant. Chances are pretty good that the SfB PSTN gateways won't conform to those requirements. The script will first look for an existing Teams gateway that matches each SfB gateway. If one isn't found, the user will be prompted to do one of the following:
All this is presented to the user in a straightforward menu. Once all the selections are complete, the selected matches are shown before erasing any existing Teams EV configs and migrating the SfB EV configuration: 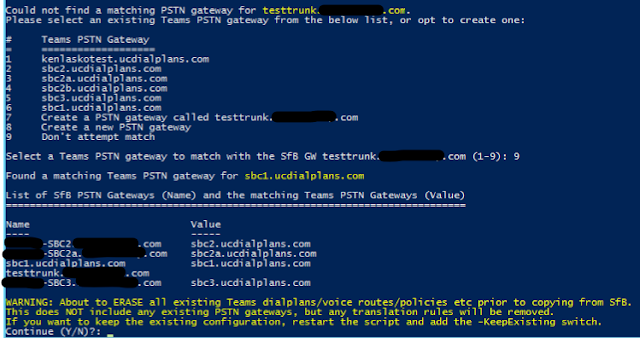 The usual trained monkeys will then migrate all the SfB EV settings to Teams, with a few caveats:
If all goes well, the script should progress like this:

If you want to see more details around how the secret sauce is made, run the script with the -Verbose switch: 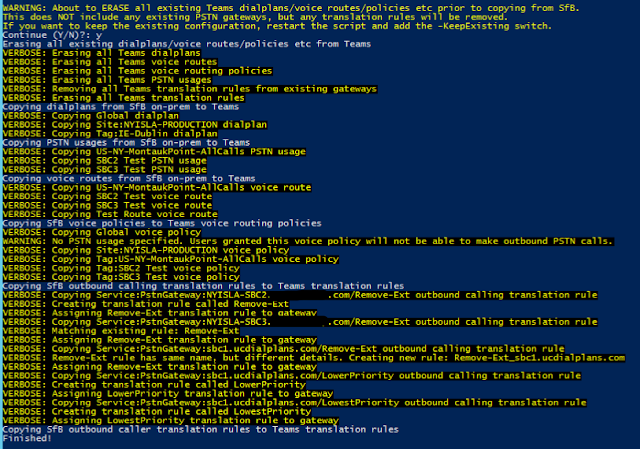 Once complete, your SfB Enterprise Voice config should be completely migrated to Teams. Check things over to be sure. If you elected to create Teams PSTN gateways, you will have to revisit them using Set-CsOnlinePSTNGateway to make sure they're configured correctly.

Hopefully, this script will help make your transition to Teams that much simpler!

To get the script, go on over to my Github page to get the latest version. If you experience any issues, you can create an bug report through there.