In Lync 2010, users were able to forward calls or setup simultaneous ringing to any number that they were able to call themselves.  This could lead to people forwarding all their calls to a long distance or even international number (assuming their voice policy allowed international calling).  This can lead to increased telephony costs to the company, and there wasn't very much the administrator could do to control this, short of disabling the feature entirely.
A new feature in Lync Server 2013 Enterprise Voice allows administrators to limit where users are able to setup call forwarding/simultaneous ringing.  You'll see the new option at the bottom of the voice policy screen in Lync 2013 Control Panel (as highlighted in red). 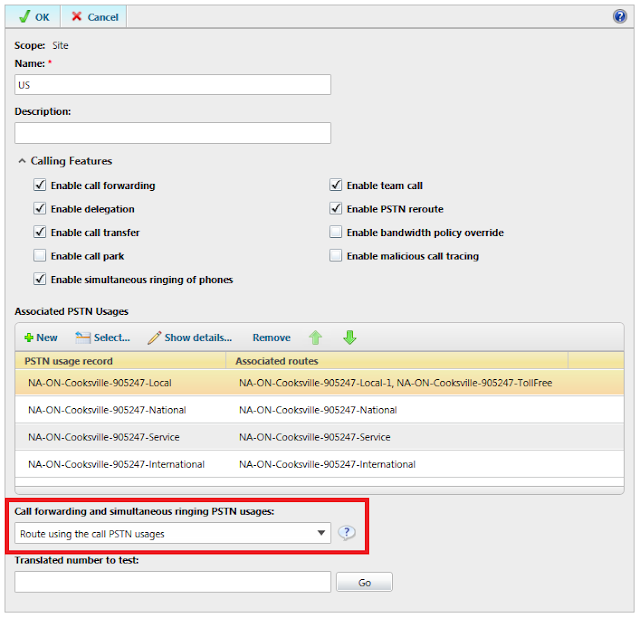 The selectable options are:

Route using the call PSTN usages (default) - essentially means to allow users to forward calls to any destination phone number they are allowed to call (the same behaviour as in Lync 2010).  So if a user is allowed to call international numbers, they will be allowed to forward/simultaneous ring international numbers. The option wording here could really use some improvement, because to me it doesn't make much sense as it currently stands.
Route to internal Lync users only - allows call forwarding/simultaneous ringing only to other Lync users within the company.
Route calls using custom PSTN usages -  allows administrators to limit call forwarding/simultaneous ringing to only the PSTN usages defined by the administrator.

When the last option is selected, the Control Panel will display a box where administrators can select the appropriate PSTN usages.  For instance, to limit call forwarding/simultaneous ringing to only local numbers, select a local PSTN usage, as shown below:

Administrators can add multiple usages to allow calls forwarding/simultaneous ringing to any combination of PSTN usages.  Since voice policies can be applied either globally, site-wide or down to the user level, this should allow administrators to grant different policies to any number of users.

This assumes the Enterprise Voice deployment has been designed granular enough to break out local, national and international calling.  If there is only a single catch-all usage for all calls, then this won't work and the Enterprise Voice configuration will have to be re-designed.

Luckily, the Lync Dialing Rule Optimizer (shameless plug) creates usages for local, mobile, national, premium, and international usages, which should be enough for any administrative need.

Unfortunately from the user's perspective, they won't get a notification in the Lync client if they try to forward/simultaneous ring a phone number that is outside the dialing areas allowed by their voice policy.

For example, assume a user's voice policy only allows forwarding/simultaneous ringing to local numbers. If the user sets up simultaneous ringing to a number outside the local dialing area, they won't get any feedback that it isn't allowed by the policy.  When someone phones the user, their Lync devices will ring as usual, but the simultaneous ring number simply won't ring.  This could generate an unnecessary helpdesk call, which could also confuse the helpdesk, if they haven't been made aware of the policy.

Similarily, the user doesn't get any feedback in the Lync client when setting up call forwarding to a number outside the allowed dialing areas.  In this case, calls will simply go straight to Exchange voicemail without attempting to forward.  However, the user will get an email stating the forwarding isn't allowed.  Slightly more helpful, but still likely to generate a helpdesk call.

Curiously, the interface still refers to Office Communicator, but since I'm still running Exchange 2010, maybe this is to be expected.

The situation would be greatly improved if the Lync client would be more informative in this respect.  In my perfect world, there would be no war, global warming would turn Canada into a tropical paradise, gin and tonic would flow freely from taps all around my house, and the Lync client would provide feedback like this when users try to forward to a number that isn't allowed: 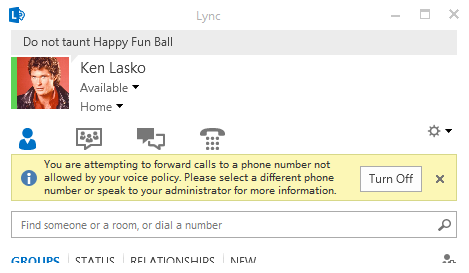 Either way, the new control administrators have to limit call-forwarding/simulring is a much needed new feature, and I'm glad it made it into Lync 2013.
Posted by Ken Lasko on Thursday, January 24, 2013 2 comments:

The Lync Dialing Rule Optimizer tries to take care of all the Enterprise Voice configuration necessary for all deployments.  On most fronts, it does a pretty good job (IMHO).  One area that has been lacking is the ability to automatically arrange PSTN usages to provide least-cost/failover routing for multi-site Lync deployments. Once an administrator has run the Optimizer for all their sites, they have to manually configure the voice policies to provide least-cost/failover routing.

If you're not familiar with how least-cost/failover routing works in Lync, please refer to my post on the subject in my Lync Enterprise Voice Best Practices series.

With version 9.0 of the Lync Dialing Rule Optimizer, Lync administrators now have the option to create least-cost/failover routing between all sites that have been deployed using the Optimizer (or at least follows the same naming conventions used by the Optimizer).

When the Optimizer-generated script detects multiple Lync sites, it will prompt the user if they want to apply least-cost/failover routing to the voice policy being generated.  If the user allows it, the Optimizer will add PSTN usages for all the other sites to the new voice policies.  This assumes the existing PSTN usages are named with the country abbreviation first, and ends with either Local, National, International etc in any of the languages currently supported by the Optimizer as in the following examples:  UK-Leeds-113-Local, IT-Rome-06-Nazionali.

The output can be best summarized by way of example.  Assume a company has Lync Enterprise Voice deployed in the following locations:

After running the Optimizer script against all sites, the PSTN usages for the Toronto International user voice policy would look like this (you might want to sit down for this):


The Optimizer will group PSTN usages from the same country near the top, using the assumption that most of the calls will be made to in-country locations and that the fewer PSTN usages the system needs to evaluate for each call, the better.

The ordering is such that least-cost routing and failover routing will occur.  PSTN usages from other countries will be placed lower in the list while still providing least-cost and failover routing for all calls.  If there are multiple Lync sites out-of-country, the ordering of PSTN usages within the National and International usages will be somewhat random. Administrators should review the PSTN ordering to make sure it suits their needs.

It is assumed that premium numbers can only be dialed from in-country locations, so out-of-country premium PSTN usages are not assigned. Also, only the local service PSTN usage is assigned for similar reasons.

All calls will use the least-cost route where possible. If a route assigned to a specific usage is unavailable, calls will use a route in another site, again keeping the call in-country if possible.

With the inclusion of least-cost/failover routing in the Lync Optimizer, administrators now have a tool that can completely build the Enterprise Voice environment for even the largest enterprise-level Lync deployment.

As always, feedback is greatly appreciated. Let me know if you come across any issues with functionality or scalability as I haven't tested if there is a limit to the number of PSTN usages that can be assigned to a voice policy.

A question that often comes up in my travels is that Lync administrators want an easy way to allow users to dial internationally but exclude specific countries for some reason.

This is very easy to accomplish once you understand the ins and outs of regular expressions, and assuming you follow all my best practices regarding number normalization, and Enterprise Voice setup.  To summarize, every number a user enters in Lync should be normalized to E.164 standards, which starts with a + followed by the country code, then the area/city code and finally the local subscriber number.  A Canadian example (country code 1) would be +14165551111.  A UK example (country code 44) would be +442033334444.  If you use the Lync Dialing Rule Optimizer to create your Enterprise Voice configuration, you'll be all set.

When all numbers are normalized to E.164, and you already have separate usages and routes for local, national and international calls, it makes it very easy to design regular expressions that meet any specific criteria required by your business.

To block calls to Iran and North Korea, modify the rule to look like this (new stuff highlighted in yellow):

This will allow any number starting with 2-9, but excludes numbers that start with 98 or 850 as required.

If you're not in North America and used the Lync Dialing Rule Optimizer to create your Enterprise Voice setup, your international rule looks a little different, because we want to make sure that North American numbers are formatted correctly (as highlighted in blue), while making sure that it does not try to route national numbers as international (using UK +44 as an example, shown in green):

To block calls to Iran and North Korea using this example, modify the rule as follows (new stuff highlighted in yellow again):

Now, anybody who tries to dial a number in Iran or North Korea will be met with a notice that the call couldn't be completed.

This method is pretty granular as you could create separate routes to block countries selectively or for a specific group of users.  If you want to just block those numbers globally, you can use Unassigned Numbers to provide an announcement to users that those numbers are not allowed to be dialled. The only downside to that method is that you need to know in advance how long phone numbers are in the country you want to block.