Out of the Gutter: The Ken Lasko Story, Part 3, Part I

In the spring of '94, I went to a local job fair to look for a summer job that was different than working at the 1 hour photo lab as I had done previous summers. After browsing a while, and leaving my resume at a few places, I came across the Microsoft booth. They were looking for technical support people for their Canadian office. I felt this was the perfect opportunity for me. I figured with my TA experience, I would be a shoe-in for the job. I excitedly explained all this to the people manning the booth, and I must have made a good enough impression, because in April of 1994, I got hired to work at Microsoft as a technical support engineer.

I was thrilled to get the opportunity to work for such a big company. When I got the job, I was told that I would be supporting MS Word 6.0. Having never used Word 6.0 before (I had always used WordPerfect), I was concerned. So, I did what any self-respecting computer guy in the 90's did, I found a copy of Windows and Word 6.0 on the still young Internet, installed these not-so-legal copies on my computer and gave myself a crash course in Word 6.0.

I didn't think I was ready by the time I started my first day at MS. Thankfully, instead of supporting Word, I was assigned to support MS-DOS 6.2. Having lots of experience with MS-DOS, I was relieved. For the next while, I supported MS-DOS 6.2, which consisted mostly of editing people's CONFIG.SYS and AUTOEXEC.BAT files so they could free up enough memory to run whatever program they needed. Keep in mind, there was no such thing as remote desktop back then. All this was done by coaching the user over the phone. Slow and time-consuming work to be sure, but I enjoyed the atmosphere. I had some great bosses and co-workers at the time, and the workplace was fun and lighthearted. You could often see other guys on calls popping up over their cubicle walls waving at one another. I moved around a lot, even while tethered to a desktop PC with an audio headset.  I would stand on my desk, lie on the floor, or wander as far from my cubicle as my headset cable (or was it a leash?) would allow.

As with most tech support jobs, it involved a lot of sitting.  At lunch, you'd go down to the cafeteria, eat and sit some more, then go back and sit at a desk again.  To keep fit during the summer, I decided to try rollerblading. Having never rollerbladed before, I strapped them on in the office and rolled around the cubicle farms to learn the basics. Soon afterwards, there was a "No Rollerblading" policy instituted, which may be my only legacy from those days.  Rather than spend my lunch hour sitting in the cafeteria, I would go out and rollerblade as far away as I could go in 30 minutes, turn around and head back. I'd grab a shower, which sometimes wouldn't "take" on some of those hot days, and I'd sweat my way through the next few calls.

I made sure I took full advantage of the employee purchase program, which allowed you to buy pretty much anything from Microsoft's catalog at greatly reduced prices. I ordered copies of just about every CD-ROM based product MS had at the time, including things like Encarta, Cinemania, World of Flight, even Julia Child's cooking guide at 1/10th the cost of retail. I recall an offer where you could buy Visual C++ for $50, and it would come with a SCSI CD-ROM drive, complete with SCSI interface card. I used the CD-ROM drive and SCSI card, but tossed the rest.


When fall of 1994 came around, my contract was extended. I decided to delay my final university year to continue working at Microsoft, since it was too good an opportunity to pass up. Over time, I got assigned to the Windows 3.1 queue, then the Windows for Workgroups 3.11 queue, where I got my first taste of working with TCP/IP (a nightmare at the time). We got introduced to early builds of "Chicago", which would become Windows 95, the biggest consumer OS play Microsoft had done up until then. I remember copying weekly builds onto 15 or more 1.44 MB floppy disks to install on my computer at home. It was pretty neat to see the progression of features and stability as time moved on.

All the OS support guys underwent extensive training on Windows 95 in preparation for what we
thought was going to be a very busy time when it was first released to the public. I can remember the excitement building as the release date inched closer. We once got involved in the media blitz by going to a local computer tradeshow where we offered to install betas of Windows 95 on any customer-facing PC that was available in a vendor's booth. At the time, IBM was pushing OS/2 Warp as an alternative to Windows 95, and IBM people were walking around doing the same thing. I remember installing Windows 95 on one PC at a vendor booth, while an IBM guy installed Warp on a PC beside it in a sort of geeky showdown. A small crowd gathered to watch as Windows 95 smoothly installed and worked flawlessly, while the poor IBM guy was sweating through issue after issue. I don't know if he ever got it going.

On the day Windows 95 finally released, I was sitting in my cubicle waiting for the onslaught of
calls. We heard about the lines at stores snaking out the doors. At lunch we went out and marvelled at the sight of so many people buying Windows 95. I've never seen it before or since. Back at work, we twiddled our thumbs. The calls were trickling in at a slow rate, but most of us sat idle. We were all wondering if Windows 95 was so stable and easy to use, that nobody was having issues. At around 5pm, as people got home and presumably started installing Windows 95 in excitement, the call volume went up dramatically. Within 30 minutes, we went from idle to full tilt with long wait times for the large number of users waiting in the queues. We churned through the issues day after day, but it wasn't too long before call counts settled into a new level of "normal call volumes".

With fall of 1995 approaching, I debated whether to stay at Microsoft of return to university to finish my final semester. I didn't see the point since I felt that I had started a good career at Microsoft, and all I would get is a piece of paper. I confided to my boss, who had the absolute best advice ever: "What's 4 months out of the rest of your life?"  So, with that, I went back to university and got my bachelors degree. While I was at school, my MS boss was wonderful in that he let me work the queues the odd day or weekend, even though I was sure they didn't really need me.

When I finally finished university, I returned full-time to Microsoft, but I felt that something was different. I had my university degree, but here I was still doing the same technical support I was doing before. I needed a change, plus the commute was starting to wear on me.

In the spring of 1996, I decided to take a job as a "sales engineer" for a PC card company based out 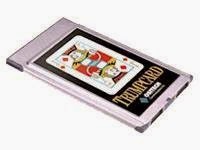 of the my home city. If you were around laptops back then, things like built-in modems and network cards just weren't an option. You had to use credit card sized packages called PCMCIA cards (or simply 'PC Cards') to get these functions. Laptops of the era usually had 2 or more of these slots. Need a modem? Go buy a PCMCIA modem card. Need a network card? Buy a PCMCIA network card. Our company had an edge in that we had the world's first combination network/modem card. These playing-card sized devices had an interesting playing card-based motif that definitely caught people's attention.

My job was to travel the US and Canada helping the salespeople with the technical aspects of their PCMCIA cards. For a 20-something guy, this was a sweet gig. I got to go to some pretty cool places across the continent with some fun people. This company also had a 3-port networking hub dongle that you could use to create a simple ad-hoc network with other laptops. You could daisy-chain these things together to add more laptops to your network. Our favourite thing to do was to throw network cables between the seats on an airplane so we could play multiplayer Quake during cross-country trips.

I was at this particular job for a few years, when a chance call from an old colleague from my Microsoft days turned my career into another direction that led directly to where I am today.

Continue reading the dramatic conclusion - "You want me to be the expert on WHAT????"
Posted by Ken Lasko on Monday, February 02, 2015

Email ThisBlogThis!Share to TwitterShare to FacebookShare to Pinterest
Labels: commentary