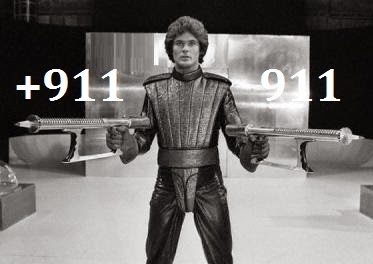 I recently had the distinct pleasure of engaging the Lync community via Twitter to ask how many people normalized their service and emergency numbers to include a plus sign (+). I asked this question because I had come across a couple of SIP providers in both the US and internationally that expected E.164 (global numbers starting with a plus sign) phone numbers for all except for emergency and service numbers. To put it another way, they wanted a plus in front of all phone numbers except for emergency/service numbers.

My very informal poll results were as follows:


Use + for everything: 6 votes
No + for emergency/service numbers: 4 votes
It depends: 1 vote

A "lively" discussion ensued between @ucomsgeek and @CAnthonyCaragol (the C stands for "Corky", in case you were wondering) on the validity of using a + sign in front of numbers that are not dialable from outside the originating country. The discussion got a little crazy and we very nearly came to blows on several occasions. @ucomsgeek had to be admitted to the hospital with what can only be described as an "RFC induced heart palpitation".

Reading these documents is an enlightening and mind-expanding experience. The E.164 standard takes a lot of pages to say that an E.164 number consists of the country code, followed by area code (national destination code or NDC) and the subscriber number. 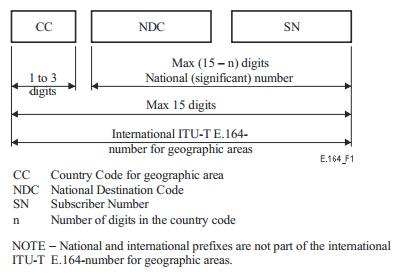 Other than that, it doesn't say anything about plus signs or anything else other than just boring numbers, so we turn our attention to the much more interesting and relevant RFC3966.

RFC3966 has a lot to say about how to format numbers for use in computer/telecom equipment. The first thing that struck me was that the plus sign is reserved ONLY for global numbers, meaning numbers that are globally unique and adhere to the E.164 standard described above.

Section 5.1.4 describes how to format a global number:

So, since numbers like 911 are not global numbers, they can't be referenced with a plus sign, but have to be formatted with a context, which is described a little bit later.

Section 5.1.5 describes how to format a local number (which includes service/emergency numbers by definition of not being global numbers):

Section 5.1.5 goes on to say more about how to format local numbers:

What the above says is that local numbers must use a specific parameter called "phone-context" to ensure there is no ambiguity with global numbers. A little further reading brings up 911 number formatting as an example:

So, for example, 911 should be formatted as tel:911;phone-context=+1 for North America, but clearly says that +1911 is not acceptable.  However, Lync doesn't support phone-context in normalization rules or routing logic (trust me, I tried), so we're kinda stuck if we want to be fully RFC3966 compliant with regards to emergency and service numbers.

We're left with two options for service/emergency numbers really, either use the plus sign or don't. Since the plus sign is supposed to be reserved for global numbers, we probably shouldn't use it for emergency/service numbers. But on the other hand, people are generally used to seeing all their dialed numbers in Lync magically get formatted with a plus sign when it matches up with a normalization rule, which gets taken as a sign that you're good to go (at least that's the way I take it).

But consider this weird little thought experiment. If you normalize 911 to +911, you could think that this represents a really short number within India (country code 91). Yes, I know that a country of more than a billion people is likely going to have more than 9 phones, but you get the idea. What if India decided you could dial the Prime Minister of India by dialing "1"? Then anybody in North America trying to have an engaging conversation with Narendra Modi would end up talking to North American emergency services instead, which would be baffling for both sides.

Another possibility is that you could inadvertently route emergency calls to a global destination. Imagine you have a Lync server in India, and you decide to use least-cost routing to save on toll costs by routing any India-bound call to that Lync server. You configure a route and PSTN usage that sends any call starting with +91 to the India Lync gateway. You inadvertently put that PSTN usage above a PSTN usage meant for local service numbers. Now any call to 911 gets routed to India, and will most likely fail.

You could say the solution to the above scenario is just to make sure that service PSTN usages are above any international PSTN usage, but I'm a fan of engineering solutions that don't rely on someone setting things in exactly the proper order to get the desired results. I'm thinking of administrator/human fault tolerance here.

Rather than say the odds of any given service number conflicting with a real global number is vanishingly small (probably true, but you can't know for certain.....at least until the Lync Optimizer has dial rules for every country in the world), I'd rather ensure with 100% certainty it won't happen, by not putting a plus in front of emergency/service numbers.

Lync will happily route numbers with or without a plus, as long as your routing logic allows for it. You could build your entire Lync Enterprise Voice deployment around not using plus signs at all if you wanted to, but I wouldn't advise it, mostly because of Lync federation. Published phone numbers from federated contacts with a plus sign would not route in a deployment built around not using the plus sign.

So, there you have it. This blog post has convinced me that not using a plus sign for non-global numbers is the way to go.  I've updated the Lync Optimizer code to follow this tweak in best practices. What are your thoughts?  Does this change your view?  Does this very long blog post on the topic of a plus sign make you fear for my sanity? Let me know in the comments.
Posted by Ken Lasko on Thursday, January 22, 2015