Introduction - What is Inter-trunk Routing?

Inter-trunk routing is a new feature in Lync 2013 that allows Lync Server to be the central call processor for a multi-PBX deployment.  In previous versions, Lync was only capable of being the final destination for phone calls.  If an inbound phone call couldn't be matched to a Lync user, the call would fail.  There was no way to have Lync forward calls on to another PBX, which limited the configuration options available to administrators.

Inter-trunk routing gives Lync administrators the ability to take calls in from a variety of sources and forward them on to other non-Lync destinations if there isn't a matching Lync user with the target phone number.

UPDATE 10-June-2013: Richard Brynteson posted a more knowledgable deep-dive into inter-trunk routing mere days after I posted this. I made a slight adjustment to my process based on what I read in his blog, so its definitely worth reading.

As usual, when I come across such a situation, I assume that it must be so simple to configure that it didn't occur to anyone to actually document the HOW.  I then assume I must be a complete idiot for not knowing something so plainly obvious to every other Lync administrator on the planet. So, after much flailing around, I figured out a solution that works using inter-trunk routing.

Since I wanted to route only four specific phone numbers between trunks, I needed to make sure that I enabled inter-trunk routing for those numbers and no others.  If I allowed inter-trunk routing for too wide a range of phone numbers, we could get into a situation where calls could enter Lync, pass onto the target PBX and route back into Lync, causing a call loop.  Rather than leave it to the target PBX to ensure a call loop doesn't happen, I figured it best to ensure Lync only pass the specific numbers to the PBX.

I started by editing the site-level voice policy attached to the Lync site where the incoming SIP trunk calls came into Lync.  I created a dedicated PSTN usage/route combination for those four numbers.  The PSTN usage was called NA-ON-Cooksville-289555-MitelForward to keep with the naming convention used by the Lync Dialing Rule Optimizer.  The route was called NA-ON-Cooksville-289555-MitelForward with a route pattern of ^\+1289555(3926|67(33|34|80))$ pointing to the PBX at 1.1.1.1. 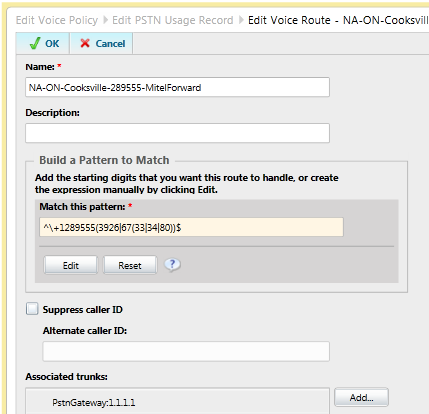 The PSTN usage was placed at the very top of each voice policy's PSTN usage list to ensure that any Lync user that tries to dial those numbers will forward the calls to the desired PBX. For good measure, I also added the PSTN usage to the Global voice policy, although I'm not sure this is necessary.

Next, I assigned the new PSTN usage to the incoming SIP trunk under Trunk Configuration.  If the trunk doesn't exist, add it as a new pool trunk.  I then added a trunk for the PBX and added trunk translation rules to strip the number down to 5 digits, which is what the target PBX is expecting.

Once done, I committed the changes and waited a few minutes for the changes to bake to a nice golden brown.

The moment of truth came when I was able to call one of those four numbers and listen as Lync seamlessly passed the calls onto the Mitel PBX.  Great success!

I'd like to say it was my deep, Yoda-like knowledge of how call routing works in Lync that allowed me to think through the process of determining how inter-trunk routing works. Unfortunately, the truth is that I tried random combinations of things until I stumbled blindly onto the solution.  There's a reason why I chose that picture of the Hoff looking vacant and stunned at the same time as my avatar....it's how I look and feel much of the time.

To summarize the process:
When complete, the whole call process should function as follows:
For a more detailed description on how the call flow will proceed, check out the Mastering Lync blog.  Richard Brynteson did a series on the nitty gritty details behind dialing behaviours in Lync. His post on Inter-trunk dialing is a deep-dive into the details that I don't get into here.

If there's anyone else out there trying to figure out how to implement Lync inter-trunk routing, I hope this helps figure things out.  As always, if you have any questions or can correct any misunderstanding I might have on the process, just leave a comment.
Posted by Ken Lasko on Tuesday, June 04, 2013