When the full suite of Lync mobile clients first came out, the Android experience was less than thrilling.  One key feature missing was the ability to use the mobile client to make the Lync server call your mobile phone and then connect you to the person you are calling (call-via-work).  All the other mobile clients had that feature, and the reason given was that it was difficult to program in Android's fragmented OS space.  Fair enough, but it certainly wasn't a barrier to the hundreds of thousands of other apps that are available for Android.

It seems as though someone at MS finally got the message and they've just released a Lync Mobile update for Android in the Market.  When I was at the Lync 15 Airlift last week, they said there would be an update "in a few months".  Happily, they should have said "a few days".  Wish this were the way for all upcoming MS products.  The details for the update are as follows:

What's in this version:

Of course, I installed the update and had a poke around.  Right off the bat, Lync Mobile asked me to verify my mobile number to be used for Lync to phone me back when using Call-via-Work.  Immediately, it seemed as though the client was more responsive than before. This could just be wishful thinking, but it did seem snappier. 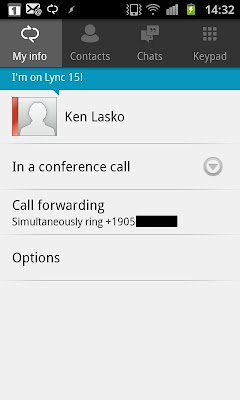 Clicking on Call forwarding takes you to a screen where you can edit your settings.  Any changes you make here are immediately reflected in your Lync desktop client. 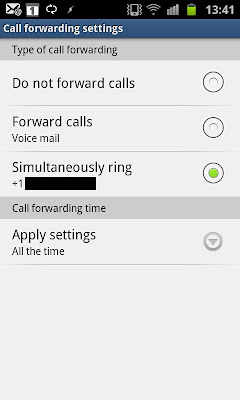 The Options screen has new options for changing sound and vibration settings.  When you select those options, you are able to change it to System settings or Never. 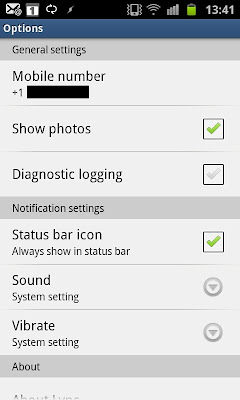 The Contacts screen looks the same as before.  Status updates did seem quicker than before, so maybe that was part of the bug fixes. Clicking on a user brings up the same screen.  No changes to the UI were noted here. 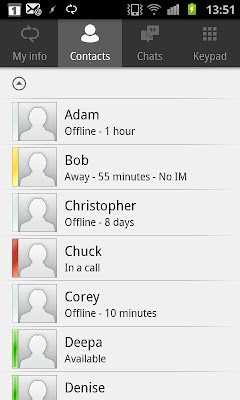 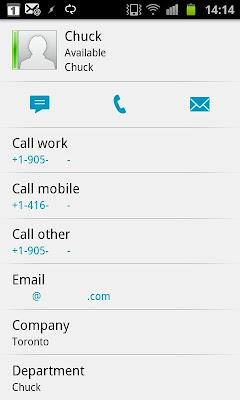 Before the update, when you clicked a phone number, it would just use your mobile phone to make the call. There was no integration with Lync.  Now, when you make a call, Lync will notify you to answer the next incoming call. 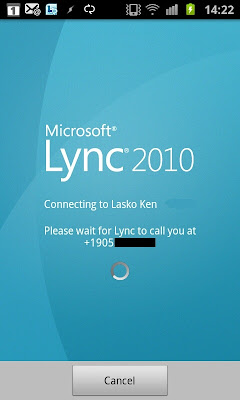 The next call will appear to be coming from your office phone number, which you should recognize.  As soon as you pick up the call, you'll hear it ringing the other end.  That user will also see your office phone number.  This effectively hides your mobile number from other users and will also be useful in situations where incoming mobile calls are free or where a call would be cheaper when being made through the Lync server PSTN connection.

There is a new screen called Keypad.  From here, you can dial a number directly.  As with the previous example, the Lync server will call your mobile number and then connect you to the number.  One thing I noticed is that the normal normalization rules don't seem to kick in. So, I have to dial the full 11-digits instead of 10-digits like I normally do (Lync adds the 1 for me). 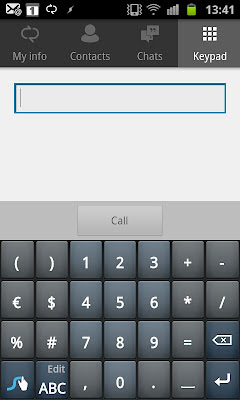 The most welcome addition for me was the ability to do one-click meeting joins from my Android phone.  Before the update, I would have to manually enter the conference ID info, which would mean memorizing or writing down the confID and then entering it.  Tough to do when you're trying to join a call from a car.  Now, you can just click the meeting invite from your email, and it will call you and connect you to the meeting seamlessly.  Even better, when I tested this feature while I was already joined to a meeting via Lync on my desktop, it dropped the desktop audio and seamlessly joined me via my mobile.  So, if you have to leave, you can transfer to your mobile without missing a beat.  Very slick and impressive!

The notification icon has also been updated to be more informative.  While Lync is running and actively connected, you'll see the familiar Lync icon in your notification bar.  When Lync is disconnected, the icon will show a little X (as highlighted in red below).

Since there isn't a Lync push notification service for Android, you won't get conversation updates when disconnected.  However, if your phone works like mine (using JuiceDefender), the phone will shut off all network connectivity when not being actively used, but will periodically do a check. At that point, you will get any queued notifications. The user at the other end might get a failed delivery notification, so this isn't a very clean way to operate.

Even with the downsides, these updates are an extremely welcome addition to the Android Lync client.  This brings Lync for Android up to near-feature parity with the other mobile clients.  This Android fan is extremely happy!