I've been keeping myself busy lately with updates to the Lync Dialing Rule Optimizer.  If you've been keeping track, you may have noticed the numerous improvements lately, including new options for adding Call Park and Premium Number Blocking.


I am now proud to unveil the latest iteration of the Lync Dialing Rule Optimizer (v7.0).  You now have the option to include dialing rules for local extensions.  This is useful for companies that connect Lync to an existing PBX and want to maintain extension dialing for their Lync users.  It can also be used to allow Lync users in a purely Lync environment to dial each other by extension number, which is especially useful to help users transition from a legacy PBX environment where they were used to dialing each other by their extension.

The new option is visible for Lync users in all countries, as shown below: 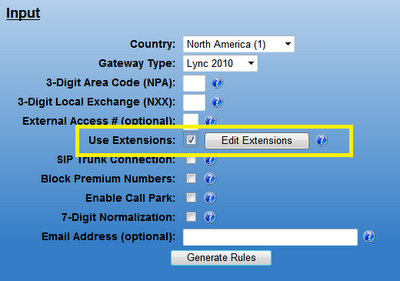 When you select the checkbox, it will show an Edit Extensions button.  Clicking it will bring up the Extension Entry screen... 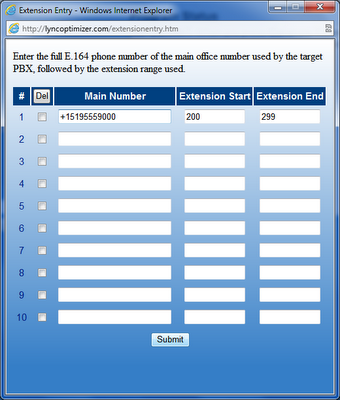 Add up to 10 extension ranges and the associated PBX main office number, in e.164 format.  The program will create normalization rules, routes and outbound translation rules to make sure that when a Lync user dials an extension, it will route to the PBX.

I've also cleaned up the .PS1 script so that when you run it, it will provide concise and useful information about what it's doing, rather than the flying stream of output it used to do.  It will also prompt for an application pool to apply call park/block rules, if it detects more than one in a site.

Try it out, and as always, be careful when applying to an existing Lync site.  The script is designed to work in a new, blank site.

If you find issues or have ideas for improvement, please let me know.
Posted by Ken Lasko on Wednesday, November 09, 2011