I love the Lync client (I also love lamp).  It's a slick, easy-to-use application that handles, IM, voice, video, conferencing, whiteboarding and desktop sharing.  But like everything in life, you've got to take the good with the bad.  The bad things in Lync are really more minor annoyances to me, but when I see them trip up users over and over again (myself included), I think "there's got to be a better way to do this".  I'm a stickler for a well-designed user interface, so when I see something missing, it gets on my nerves a bit.

The thing I'm talking about today is related to desktop/application sharing.  UI-wise, it works like a charm in most cases, but there's a scenario that more often than not, confuses the hell out of people.  Let me take you through it:

You start a desktop sharing session with one of your colleagues.  You easily find the Sharing button in the Lync client and click Share desktop. 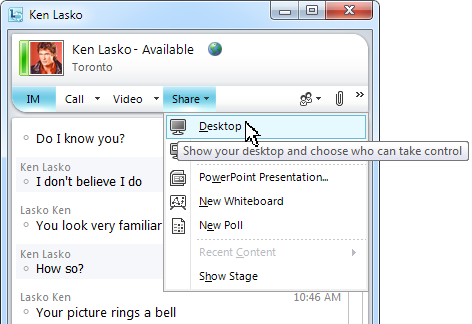 You share your desktop, and everything is great.  You'll notice a yellow bar notifying you that you're sharing your screen.

If you click the Preview button, it will open the "stage" which shows you what other people are seeing. The stage will show you one of those cool things that happens when you have 2 mirrors opposite each other....the scene just keeps repeating itself smaller and smaller and smaller until its the size of atoms (or so I imagine).  Normally, you don't want to show your stage, because it just gets in the way, so you click "Hide stage". 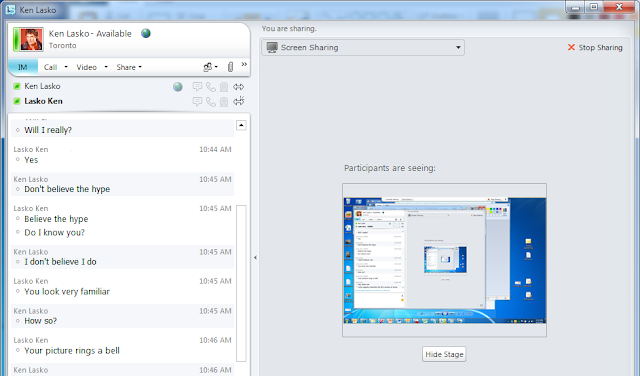 Now, the other guy wants to show you something on his desktop, so he shares his desktop out.  He'll get a notification saying his sharing will replace yours..

And your screen sharing session will just go away and you'll see this yellow bar notification.

However, even though the double arrow beside the user sharing is "lit up", you won't see his desktop.  You'll thrash around in confusion until either you quit your job because Lync has "beaten you" or you stumble onto how to see the other person's desktop.  If either of those cases don't apply, I'll share the secret.  You have to click on Share - Show Stage for the other guy's desktop to show up on your screen. 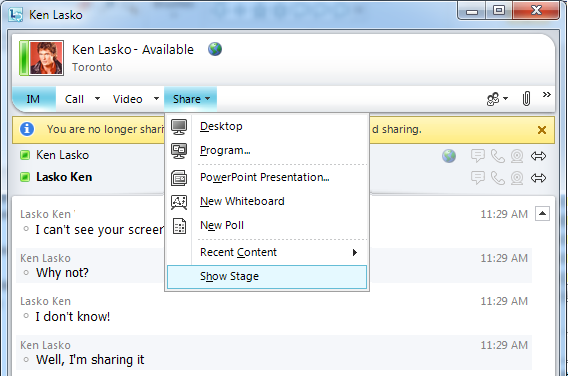 A very simple way out of this little UI conundrum is to add a button on the yellow notification bar to "Show stage".  If the right people see this blog, maybe we'll see it incorporated in a future patch.

Until next time, cheers!
Posted by Ken Lasko on Wednesday, October 05, 2011