The Response Group Service (RGS) is a basic hunt group/interactive voice response system included with OCS/Lync.  While it doesn't have the features of a full-fledged call center application, it is still extremely handy for a lot of companies that don't require (or want to pay for) a separate solution.

Response Groups in Lync haven't changed significantly since the OCS R2 days. You still have to create and manage the hunt group/IVR workflow via a web-based console that is separate from the main Lync Control Panel.  There is a Workflow tab within the Response Groups section of the Control Panel, but clicking on the Create or edit a workflow button will open up a separate IE window where you manage workflows. The interface is very similar to the OCS R2 version. Why they couldn't port the webpage into the Silverlight Control Panel is beyond me. It couldn't be that difficult to translate.


No More Obscure Command-Line Utilities
One welcome change is that you are no longer required to run the command line utility RGSCOT to create the initial workflow. All the required settings are done within the web-based console.  This was a big usability issue with workflow creation in OCS R2. You'd start up the web console and were presented with an empty drop-down list of available workflow groups. You'd have to read the help documentation to learn you first had to run the RGSCOT utility before creating the workflow in the web console. I'm glad to see this is gone in Lync.

Queues and Groups
Managing queues and groups is very much the same as in OCS R2, except most of the available settings are done from within the Lync Control Panel instead of the separate Response Group MMC that got called up from within the main OCS management console.  One interesting change is that in Groups, you have the option of using Attendant as a routing method, in addition to the usual Longest idle, Parallel, Round robin, and Serial.  Selecting Attendant as a routing method is used in situations where you want to give all the users who are signed into the queue the ability to answer calls in any order. Using the Lync Attendant, they will see all the calls in the queue and can answer whichever one they want. Once answered, the call is removed from the view of the other agents.

Workflow Changes
The most changes are in the Workflow section. As noted above, you still have to use a separate web-based console that has the same look and feel as in OCS R2. There are some notable changes, though. Firstly, your agents' identity can be hidden from callers, instead of being displayed to all if they are calling via Lync. However, conferencing, application/desktop sharing, file transfer, whiteboarding and data collaboration and call recording are not supported in this scenario.

The options for calls received after-hours or on holidays are pretty much the same as in OCS R2.  Ditto for the options for queue overflow/timeouts. 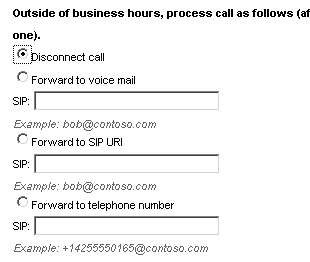 Music-wise, you can now use WMA files in addition to WAV files for music-on-hold.  The quality and size requirements stay the same:
Incidentally, if you don't specify your own music, Lync will use its own.  In OCS, if you didn't select a music file, users would hear the standard ringtone instead.

High Availability
If you require high-availability for your Response Groups, you will have to deploy multiple Lync Enterprise Edition servers in a pool.  You can't take advantage of the backup registrar features in Lync. For instance, imagine you deploy two Standard Edition front-end servers with RGS enabled at two different sites. There is no RGS connectivity between the two servers, so the hunt groups/IVRs you create are totally separate.  If one of your servers go down, users will still be able to make normal calls via their backup registrar Lync server in the other site.  However, all response groups configured on the downed server will be unavailable.

User Experience
For the user experience, things are a little more streamlined. Gone is the window within Communicator that shows your queue membership.  You now see this information via a separate web page that looks very similar to that window in Communicator.  You access this by clicking the Options gear icon, and selecting Tools - Response Group Settings. It would be nice if it could be integrated better within the Lync client, but its a minor quibble.

When you are added to a workflow, you do get a notification in Lync, as below:

Clicking the notification takes you to this page, which gives a nice overview on how to be a Response Group agent.

When a call comes in, you get the familiar toast that clearly shows its arriving from a call to a response group. You are also notified if your identity is hidden (the Anonymous in the top-right corner):

If the call came in via an IVR, the call notes will have the details of how they answered the questions: 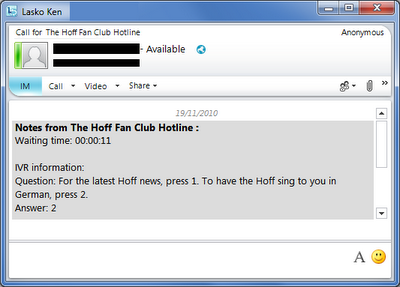 Another interesting new feature is the ability for members of anonymous response groups to make calls anonymously:

Conclusion
Overall, while there are a number of welcome improvements to Response Groups in Lync Server 2010, it isn't a wholesale re-write of the entire application.  The two biggest improvements: agent anonymization and unlimited IVR questions/answers will definitely entice more customers to use Lync for their call center than in OCS R2.  Our own company will be moving our call center to Lync very soon. I'll let you know how it goes.
Posted by Ken Lasko on Friday, November 19, 2010