What is Lync Server 2010, you may ask?  If you haven't seen it mentioned anywhere else yet, then I guess I'm the first to let you know that CS "14" is now officially known as Microsoft Lync Server 2010.  The client is simply known as Lync 2010.  I'm not all that crazy about the name yet, but hopefully it will grow on me. If you want to try it out, the release candidate is now publically available from here.  You really should put it in a lab, but I've been running it in a limited production environment for several months now with very few issues. Its a very solid product. Now on to our regularly scheduled posting....

One important feature added to Lync Server 2010 is support for E.911.  E.911 (or Enhanced 911) is the next-generation of 911 emergency services in North America.  It provides location information for non-landline-based telephone numbers, like mobile phones and IP phones.

The three most important things to note about E.911 is the same three things you need to worry about with real estate:  location, location, location.  Due to the inherent mobility of Lync users, it is critical that the telephony solution provide some manner of ensuring users can be automatically located in the event of a 911 emergency call.

Lync Server 2010 provides several ways to ensure locatability (is that a word?).  The simplest method is to allow or force users to enter their location information at login to Lync.  By default, this feature is turned off in Lync Server 2010 RC, but you can enable it by typing the following command:

The default Location Policy is called Global, but you can create new site-level or user-level location policies if required by your deployment.

EnhancedEmergencyServicesEnabled enables the location features in Lync Server 2010. This must be set to $TRUE for anything else to work. 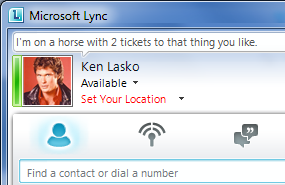 If LocationRequired is set to Disclaimer, users will see the following: 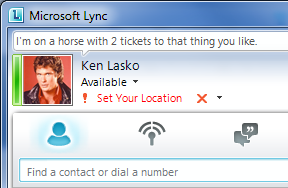 If they dismiss the prompt, a message like this will pop-up: 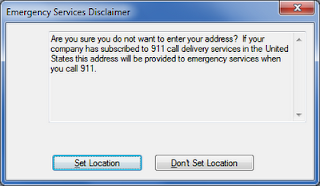 The message can be changed by using the command Set-CsEnhancedEmergencyServiceDisclaimer.  The current documentation says that when using the Disclaimer option, users will not be able to make non-emergency calls if they ignore the prompt, but in the Release Candidate I was still able to make calls.

When they type in a location name such as Home, a dialog box will pop up with additional address information: 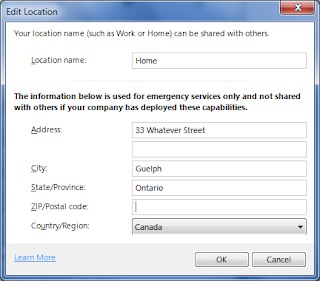 To make this information available to emergency services, you have to make a few more modifications to the location policy using Set-CSLocationPolicy:

EmergencyDialString is the number that will be treated as being an emergency call. The call SIP data will include the user's location. This is 911 in North America.

PSTNUsage is the Phone Usage that will be used to route the emergency call. In this example, I used "Emergency", which is a Phone Usage I created that contains a route for 911 calls.

With this enabled, your users will be able to input their own specific location information so that emergency services can easily find them if they call 911.  The nice thing about it is that if a user goes to several locations and properly enters their address information, Lync will recognize those locations and will select it automatically the next time they are at that location.

However, since this particular solution depends on users inputting their location information correctly, it isn't ideal for a corporate setting.  My next blog posting will detail how administrators can assign locations to users based on information stored in a central database.