Last week's episode talked about how to properly use the external access prefix in Lync. This week, we're talking about... 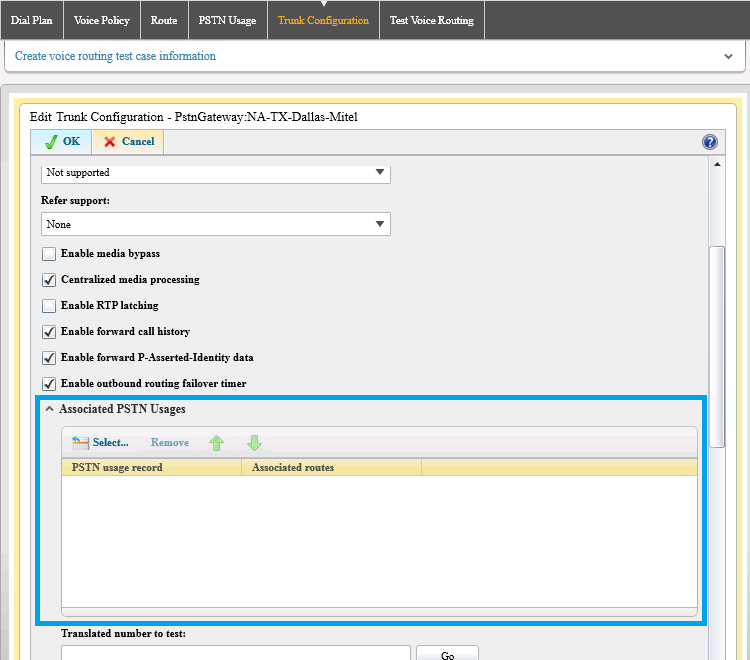 The wording is vague, and even Technet's description of the setting doesn't tell you much.

From what I've seen in multiple deployments, people tend to add the PSTN Usages that were created specifically for the particular trunk, which sort of makes sense if you use Technet's description as your only guide.

Some other places on the Internet take this idea even further, and imply that this section is used to define the PSTN usages that are allowed to use the specified trunk. If you think about it, you already accomplish this by defining the PSTN Usage/route combination without having to do anything else, so that can't be right either.

Now, you might be aware that Microsoft mentions in their Technet planning documentation that Lync can do "inter-trunk routing".  From their own documentation:


This new capability enables Lync Server to provide call control functionalities to downstream telephony systems. Intertrunk routing can interconnect an IP-PBX to a public switched telephone network (PSTN) gateway so that calls from a private branch exchange (PBX) phone can be routed to the PSTN, and incoming PSTN calls can be routed to a PBX phone. Similarly, Lync Server can interconnect two or more IP-PBX systems so that calls can be placed and received between PBX phones from the different IP-PBX systems.


In more general terms, Lync can pass inbound phone calls on to a different destination, which could be another PBX system or even back out to the PSTN.  So, now you're thinking "That's a great feature, but what does this have to do with Associated PSTN Usages?"  Since the title of this article says "Inter-Trunk Routing", it should dawn on you that "Associated PSTN Usages" has something to do with inter-trunk routing.  If it doesn't, then lie down a while and come back after a good nap.

As you hopefully have surmised by now, inter-trunk routing is done using "Associated PSTN Usages" from within a trunk.  The details behind how to do this are helpfully discussed in some of my own blog posts, Technet and also those by fellow Lync MVP Richard Brynteson:
http://ucken.blogspot.com/2013/06/inter-trunk-routing-in-lync-2013.html
http://masteringlync.com/2013/06/07/inter-trunk-routing-deep-dive/
http://technet.microsoft.com/en-us/library/gg425831.aspx

To summarize those blog posts, if an incoming call from a trunk can't be routed to an internal user, it will attempt to route the call to an alternate trunk, if there is a matching PSTN Usage/route combination assigned to the incoming trunk.

When people add the PSTN usages to a trunk that are already assigned to that very same trunk, incoming calls could potentially be sent back out the same way they came in, if there isn't a matching user in Lync. This could result in odd behaviour, including calls bouncing back and forth between a PBX and Lync, in what I call the "Telecom Routing Donut of Doom".  Fortunately, in most cases, adding PSTN usages to the trunk has no effect, since there is almost always a Lync user assigned to the incoming phone numbers.

I've seen numerous deployments where they've added PSTN usages willy-nilly (my Word-of-the-Day calendar entry for today).  If I see those, my next question is "Oh, so you're using inter-trunk routing."  If the reply I get back is some variation of  "What's inter-trunk routing?", then I remove those PSTN usages from the trunk configuration.

There you have it.  Tune in next time (not necessarily next week, since I'm bad at reading calendars) where we talk about something else that I haven't quite figured out yet.
Posted by Ken Lasko on Tuesday, October 07, 2014